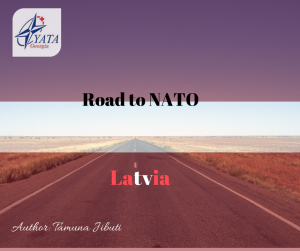 Latvia, similar to Lithuania and Estonia, gained the independence in 1991. After 13 years, in 2004, it became a member of the EU and NATO. On its path to international recognition, Latvia overcame quite a big bunch of obstacles: the Ministry of Defense was formed; the draft of mandatory military service was created to establish new Latvian forces. One of the biggest challenges included Russian military troops refusing to leave the country. In 1994, before their final withdrawal, the Russians destroyed most of their military objects or made them unusable for the Latvian army.

In the same year, Latvia joined the NATO program, called, “Partnership for Peace”, which gave it an opportunity to get direct consultations from NATO civic and military advisors about developing the national defense system. From 1996 Latvian soldiers participated in the peace-keeping missions in Bosnia-Herzegovina, and in Kosovo – from 1999. The country also contributed to the ISAF program in Afghanistan.

Ethnically Russian community makes almost the third of the whole population (26% according to the 2014 statistics). The reforms of 2004 to restrict The Russian language in the schools has been quite controversial. In 2006, tighter citizenship rules were adopted – candidates cannot get citizenship if they do not pass Latvian language test. Human Rights Organizations report on the limited access to the range of rights for stateless persons. However, Latvia is ranked above-average among the world’s sovereign states in democracy, press freedom, privacy and human development.

Russia’s grown aggression to its neighbor states, like Georgia and Ukraine, made Latvian government consider the increase of military budget which is distinctively smaller than in Estonia and Lithuania. Latvians have very negative feelings towards Russia, remembering Soviet terror and occupation. Though, the Russian-speaking population, including young people, is in favor of Putin’s government assuming it unjustly victimized.

Latvia’s economy grew by 50% between 2004 and 2007, but the global financial crisis of 2008 hit the country badly. Budget-cut and the EU support helped recovery and Latvia returned to growth in 2011. By late 2012, its economic revival was the EU’s strongest. In the beginning of 2014, Latvia became the member of Eurozone.

Despite a relatively successful economic transition, unemployment remains high, and in recent years, many Latvians have left to seek opportunities in other EU countries. Between 2000 and 2011, the population fell by about 13%.

Facing new challenges, Latvians look positively to the future, as NATO membership remains the guarantee of the further peace and security.