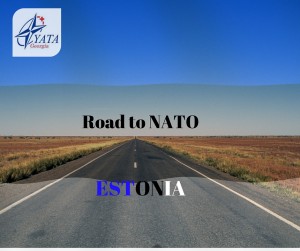 Estonia gained independence in 1991, like Georgia. By the end of 2002, two significant events took place in a contemporary history of Estonia – the country received official invitations to join NATO and the European Union. In 2004, 13 years after the dissolution of the Soviet Union, Estonia became a member of these organizations. In January 2011, it became a member of the Eurozone.

Over the last 20 years, Estonia’s experience clearly showed us, that even after the collapse of the Soviet Union and difficult economic conditions, it’s possible to promote democratic values, achieve a high level of human rights, freedom of the press and educational system. After becoming a member of the EU, 65% of export goes from Estonia to Europe, the number of investments in Estonia has been increased. For a Post-Soviet State (with a population of 1.3 million), being a member of NATO and the EU became a guarantee of security and economic development.

Estonia is an active participant in NATO’s operations and peacekeeping missions. Even before joining the NATO, in 1999, Estonia became a contributor to the Kosovo Peacekeeping Mission. In 2005-2010, the country took part in ”NATO Response Force” mission, from 2003 Estonia joined the ”International Security Assistance Force” (ISAF). Estonian units were originally located in Kabul, then – in Northern Afghanistan (Mazar-i-Sharif, the capital of Balkh province) and later – in Southern Afghanistan (Province of Helmand).

In cyber-security, Estonia is one of the leading countries of Europe. The CERT (Computer Emergency Response Team) was founded in 2006 in order to protect the internet-security all over the country. The headquarters of the European Union IT Agency and the NATO Cooperative Cyber Defense Centre of Excellence are based in Estonia.

Being a Post-Soviet country, as well as a member of the European Union and the NATO, the case of Estonia is an important experience for Georgia. Since 2006, Georgia has been a beneficiary country of the ”Development Cooperation Program” of the Ministry of Foreign Affairs of Estonia. A special attention is paid to the reforms, which put Georgia closer to European and Euro-Atlantic Structures (environmental protection, integration of minorities, strengthening the role of civil society, etc…).  Georgia and Estonia also cooperate in the field of Defense, including military education. Estonia funds Georgian students at the Baltic Defense College. With the support of Estonia, the National Defense Course is implemented in Georgia.

According to the survey conducted in 2015, 93% of Estonian population appreciates positively the integration of their country to the EU and NATO. It should be noted, that the Soviet influence in Estonia is still visible – the majority of the Russian-speaking population doesn’t hold the citizenship of the country. The reason is unknowing of Estonian language as well as the fact that some of them don’t see the need of gaining citizenship. In 2015, more than 6% of Estonian population doesn’t hold the citizenship of any country. Despite economic, political progress and successful reforms carried out during the last 20 years, Estonia is still facing a number of unresolved problems.