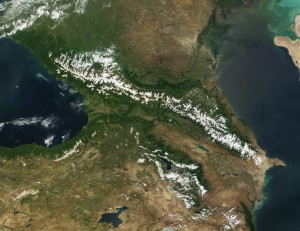 The purpose of the policy brief is to describe the successful factors of the Euro-Atlantic integration policy in shaping Georgian foreign policy. The second part of the paper will examine the influence of Georgia’s integrated Foreign Policy on Armenia and Azerbaijan. I would like to examine what kind of influence can Georgia’s newly Westernized policy have on Armenia and Azerbaijan. Georgia has become a more pro-Western strategic state and has been striving for membership of Euro-Atlantic Alliance among other neighboring countries in the South Caucasus. The state’s pro-Western stance and desire to join EU and NATO is against Russian Empire and its foreign policies. The Georgian government is eager to join NATO, mentioning that they don’t have other alternative choices.

Georgia is a member of Eastern Partnership and a priority country of the European Neighborhood Policy. Still, EU continues to support Georgia’s efforts to become a member of the EU. And, at the same time the country is actively involved in the integration process to NATO and reveals its desire to become a member to the North Atlantic Alliance. Presently, Georgia has chosen the way of becoming a member of EU and NATO in order to enhance its capacities through Western values.
Georgia’s efforts and its reforms aimed at its integration to EU and NATO, of course, creates only a headache for Russia. It is not a surprise that Georgian Government, the EU and NATO are now trying to take an advantage of Georgia’s democratic image. However, the fact is that the internal conflict in the region spoils Georgia’s dialogue with the EU and NATO. Since the 2008 Bucharest Summit, where Georgia expressed its desire to join MAP (Membership Action Plan), it has maintained its policy against Russian aggression in the territories of South Ossetia and Abkhazia. Having pro-Western policy and supporting western values is the only way to integrate and become a member of EU and NATO. But, it is still to what extent, a long term to become a member of NATO and EU, as German officials are skeptical and see Georgia’s membership as potentially sparking a confrontation with Russia. And as the answer to the Germany’s skepticism, Georgian government still supports the integration process.

Georgia, a country having territorial conflicts over the regions of South Ossetia and Abkhazia, doesn’t see any other ways, except the one of becoming a member of Euro-Atlantic Alliance in order to cut off increased Russian influence and object Russian aggression and occupation of Georgia’s territories. Russia, of course, remains uncompromisingly opposed to Georgia’s joining NATO. The integration to the membership will decrease Russian influence and propaganda in the region. In this case, Russia will change the policy, plans and loyalty bonus toward South Caucasus. Georgia’s accession to joining NATO will clearly influence its neighboring countries Armenia and Azerbaijan. Although Russia is strongly opposing Georgia’s accession to NATO as Georgia’s integrated policy can influence the relationship between Armenia and Russia. Russia will do its best to prevent the idea of NATO membership in the region.

Georgia’s joining to NATO would greatly change the situation in the South Caucasus. Another important fact is that the membership will weaken Russian presence in the region. Those are facts about Russia’s absolute rejection of the membership. Russia knows that Georgia’s joining to NATO will bring safety, stability, economic growth and democracy in the South Caucasus region. NATO is the alliance, which does not allow its members any mistakes that can cause instability. Georgia’s NATO membership influence to some extent would affect Azerbaijan to acquire development and economic growth in the region. And of course, it would support Armenia’s free choice and reduce its dependence on Russia. Azerbaijan and Georgia are very important regions to NATO. Georgia’s membership will help both countries to attempt to establish mutual agreements and possible solutions over the Nagorno-Karabakh problem through dialogue and negotiations. There could be raise a green light to the resolution process and to softening the situation through peace talks. The stability in the region is one of the key aspects of being a developed country through competitive economy and stable political situation in the region. Azerbaijan’s willingness of NATO membership could also be more visible through its very close relationship with its neighbor – Turkey.

In Armenia, Georgia’s NATO membership will influence more key aspects than in Azerbaijan. As Russian influence is strongest in Armenia in the South Caucasus region, the membership influence would be more visible on their relations. Armenia will have a chance to choose freedom for its development and to stay far from Russian influence. This would be to some extent incompatible for its close relationship with Russia. As Armenia is the only South Caucasian member republic of the CSTO, Armenia’s membership of CSTO and its close relationship with Russia is not opposed by Armenian domestic policy. Georgia’s joining to NATO will help Armenia to change its domestic policy and choose independent choice instead of Russian influence in the region.

The general declaration of NATO’s Bucharest Summit in April 2008 expressed concerns about the regional conflicts in the South Caucasus region and about challenges to territorial integrity, freedom and sovereignty of Armenia, Azerbaijan and Georgia. Separately, all three South Caucasus Countries have their own partnership missions to NATO and different Individual Partnerships. While NATO considers its engagement in the South Caucasus, to be a part of providing peace and stability in the Euro – Atlantic region, the majority of Russia’s interests and influence holds exactly the opposite point of view. According to Russia, the region will witness a negative influence on their domestic and foreign policies. It is not about to come to a compromise in the relations among the South Caucasus countries and Russia. It is about enhancement of independent foreign and domestic policies of Armenia, Azerbaijan and Georgia without Russia.

NATO’s enlargement in Georgia turned the South Caucasus into a direct neighbor to the institutionalized West. Successful completion of the membership policy will definitely bring political stability and develop diplomatic relationships among neighboring countries. It could be an essential beginning of collective defense and security reforms for both countries following Georgia’s joining to NATO. Georgia’s membership to NATO will provide stability, international security, economic growth and independent development in the regional countries. Georgia becoming a NATO member is the only option to obtain full military and political support by the international alliance to reveal its objection against territorial conflict caused by Russia. The two neighboring countries would definitely be positively influenced by the changes, democratic reforms and stability in Georgia. Georgia’s membership will also help to maintain stable economic and political relations within the South Caucasus region.